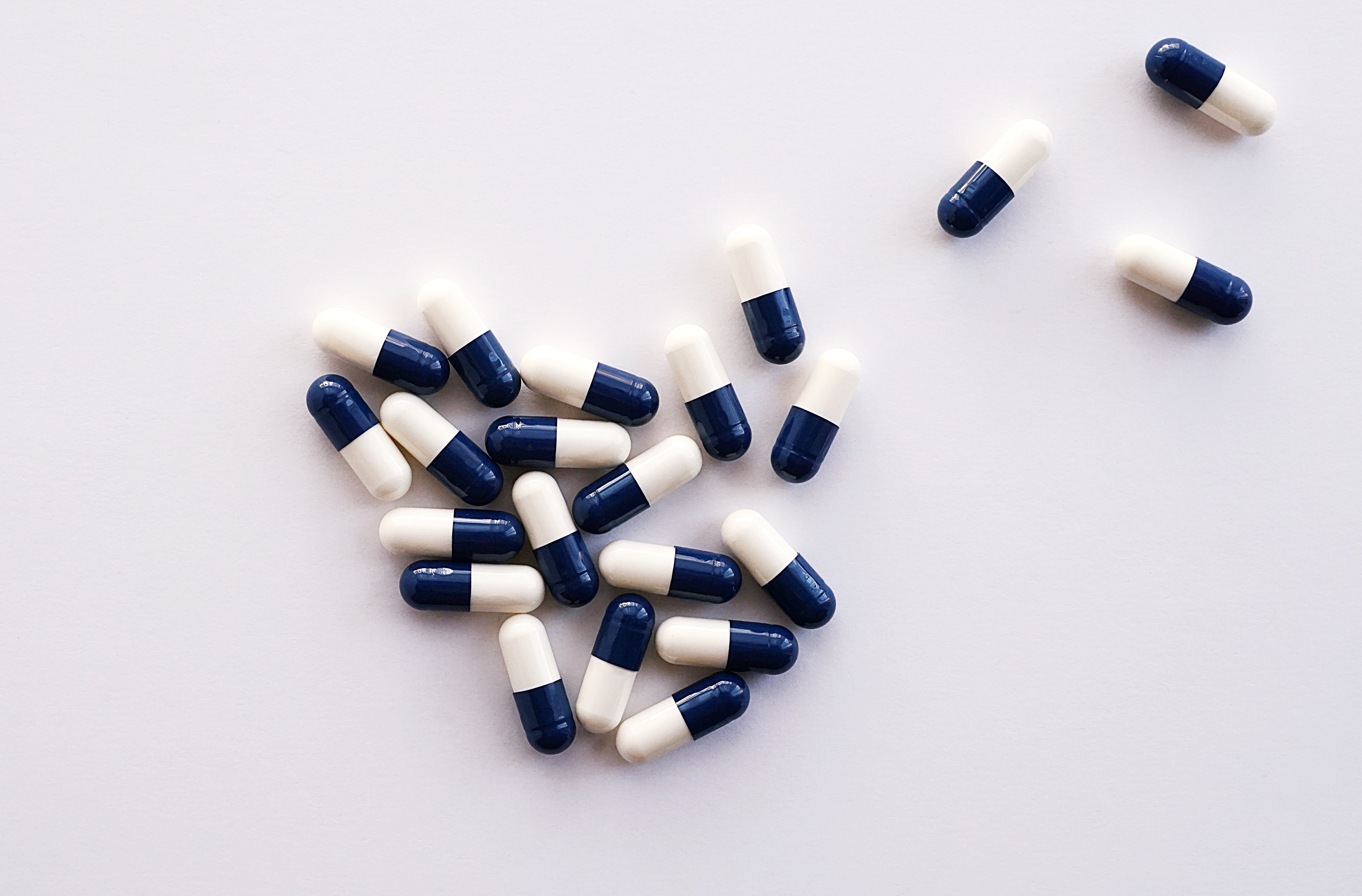 Their Honours also upheld Burley J’s conclusions that the other three batches of Juno’s products did infringe, that the patent was valid, that Juno should pay Pharmacia’s costs in relation to validity, and that Pharmacia should have a certificate of contested validity.

Pharmacia was the patentee, and Pfizer was the exclusive licensee, of a patent relating to the formulation and administration of cyclooxygenase-2 (COX-2) inhibitors. Parecoxib is a “prodrug” – a molecule that is converted into a pharmacologically active agent (the selective COX-2 inhibiting drug valdecoxib) after administration to a patient. Juno offers for sale and sells parecoxib in Australia.

The Pharmacia parties sought relief against Juno and its then-supplier, Neo Health (Australia) Pty Ltd, for infringement of the patent. Juno and Neo denied infringement and alleged the asserted claims were invalid.

His Honour accordingly made declarations that three of the exemplar batches fell within the scope of the claims and the other three did not, refused injunctive relief, and deferred costs of infringement until quantum of any pecuniary relief owed to the Pharmacia parties had been resolved. The Pharmacia parties appealed: (a) Burley J’s declaration that three of the exemplar batches did not fall within the scope of the claims; (b) his decision allowing Juno to amend its defence to specify that the infringing exemplar batches were not sold or brought into Australia; and (c) the order deferring the costs of the infringement action.

Juno appealed (a) Burley J’s declaration that three of the exemplar batches were infringing and (b) his orders that the cross-claim be dismissed and that the validity of the patent be certified.

The Pharmacia parties also filed a notice of contention asserting that Burley J ought to have found that (a) the skilled addressee could not reasonably have been expected to ascertain the prior art that Juno relied on and (b) that the problems addressed by the invention were not part of the common general knowledge.

The claims and Burley J’s construction

The patent described certain problems in relation to formulating parecoxib. In particular, it described that:

The claims were to:

(a) at least one water-soluble therapeutic agent […] in a therapeutically effective total amount constituting about 30% to about 90% by weight,

(b) a parenterally acceptable buffering agent in an amount of about 5% to about 60% by weight, and

(c) other parenterally acceptable excipient ingredients in a total amount of zero to about 10% by weight of the composition;

said composition being reconstitutable in a parenterally acceptable solvent liquid to form an injectable solution.

26. A process for preparing a reconstitutable selective COX-2 inhibitory composition, comprising a step of lyophilizing an aqueous solution that comprises:

(a) at least one therapeutic agent selected from selective COX-2 inhibitory drugs and prodrugs and salts thereof, in a therapeutically effective total amount constituting about 30% to about 90% by weight,

(b) a parenterally acceptable buffering agent in an amount of about 5% to about 60% by weight, and

(c) other parenterally acceptable excipient ingredients in a total amount of zero to about 10% by weight of the composition, excluding water;

Justice Burley concluded that claim 1 is a claim for a pharmaceutical composition which comprises the constituents (a) to (c) within certain percentage ranges, each measured “by weight of the composition”.

His Honour observed that lyophilisation, although designed to remove all water, in practice will likely leave some residual water in the lyophilisate.

His Honour reasoned that the language in the patent specification supports the view that the person skilled in the art would understand that the composition of the invention is likely to include residual water and that water is to be understood to be a non-therapeutically active component of the composition, albeit not an excipient.

Because of the water content in the exemplar batches, three of them infringed.

Juno’s primary argument on appeal was that the construction by the primary judge is, in effect, unworkable and uncertain because the amount of residual water can vary substantially from batch to batch, so that residual water is an “uncontrolled variable”.

Juno submitted that the person skilled in the art would not understand the breadth of a claim for a composition to vary depending upon the efficiency of the manufacturing process (which is not part of the claim) and that, on the primary judge’s construction, infringement of the claim could not be ascertained until after the lyophilisation and testing process. Juno submitted this was supported by claim 26.

The Full Court rejected Juno’s arguments. Their Honours held that:

As a result, the Full Court affirmed Burley J’s conclusion that three of Juno’s exemplar batches fell within the claims.

Their Honours also rejected Juno’s case that the invention was obvious in light of the prior art base (noting the pre-Raising the Bar law applied).

Juno had advanced a development pathway of eight steps. The primary judge had concluded that:

The Full Court concluded that Burley J did not err in drifting from the hypothetical to the practical in considering whether the formulator could have obtained parecoxib sodium, where Juno had asserted that the formulator would do so and the Pharmacia parties contested that assertion.

In any event, his Honour went on to consider subsequent steps in Juno’s posited development pathway and concluded that the case failed in relation to those steps, meaning that if there had been any error, the Full Court considered that it was immaterial.

Although the Full Court confirmed that a skilled addressee might take multiple pathways simultaneously, they observed that the fact that lyophilisation generally is a routine process does not mean that that it was routine to depart from the rule of thumb, agreed by the experts, that a person seeking to make a lyophilised product would likely add a bulking agent at some stage in the development of the freeze dried product; and a rule of thumb was that about 10% solid material would likely be appropriate.

For that reason, the Full Court concluded that his Honour was correct to reject the parallel experimentation argument put forward by Juno on the basis that, if a skilled addressee moved to lyophilisation, they would first try a formulation with mannitol (which fell outside the claims). Abandoning the rule of thumb, and not using a bulking agent all, would be one of a number of possibilities, not one that would be taken as a matter of routine, nor one to which the skilled addressee would be directly led as a matter of course to try.

This case confirms that, although more than one thing may be obvious, it is still necessary to demonstrate that the skilled addressee would reach the invention as matter of routine, and a course which involves too much trial and error or dead ends is unlikely to succeed in demonstrating the claimed invention is obvious.

In light of their conclusion that the primary judge was right to conclude that the claimed formulation was not obvious, their Honours did not address the Pharmacia parties’ notice of contention and reconsider whether the skilled addressee would have ascertained the prior art relied on by Juno.

The Pharmacia parties submitted that the word “about” in the claims should be understood to allow for a 5% margin of error, so that “about 90%” in sub-paragraph (a) of claim 1 extends to 94.5% as its upper limit, and not to the nearest whole number).

The Pharmacia parties relied on Smith & Nephew Plc v ConvaTec Technologies Inc [2015] EWCA Civ 607 in support of the proposition that even without the language of “about”, whole numbers would be understood to the nearest whole number. The Full Court rejected this submission, since that case related to a different specification and to different expert evidence. The Pharmacia parties also submitted that if “about” related to a simple rounding of numbers, one of the examples would be excluded. However, the Full Court rejected this argument on the bases that: (a) a skilled addressee would not look to the formulations to determine the meaning of “about”; and (b) the expert evidence that the exemplified formulation fell outside the claim was based on a number of assumptions, some of which were unexplained.

Their Honours held that Burley J was correct to conclude that “about” meant “near, close to”, and that the scope for variance in the percentages of the components was not intended to be large, particularly since the claims themselves provide a range of variances, and since “about” was also used, for example, in relation to pH ranges or the length of lyophilisation cycles. The Full Court concluded that about was plainly intended to be an approximating term, not one which was plus or minus 5% of the number in those claims.

The authors consider that the outcome in this case reflects the sensible principle that the construction of “about” will depend on the context of the patent and the expert evidence.

Their Honours also rejected the Pharmacia parties’ contention that Burley J had construed the omnibus claim without having regard to the context of the specification as a whole.

Their Honours also concluded that Burley J had not erred in allowing Juno to amend its defence to specify that the exemplar batches were not supplied for sale in or brought into Australia, and to open up the prospect that neither phosphoric acid nor sodium hydroxide was added to Juno products sold or supplied in Australia, in circumstances where the Pharmacia parties had not complained at first instance that it would be prejudiced by these amendments or sought to adjourn the trial or adduce further evidence.

The Full Court therefore held that Burley J did not err in making declarations that some of the exemplar batches fell within the scope of the claims, rather than that parecoxib products corresponding to the infringing exemplar batches had been sold in Australia.

The Full Court declined to make declarations referring to goods “corresponding to” the infringing exemplar batches, as that would be ambiguous, and declarations must be clear, particularly where the manufacturing process meant some exemplar batches infringed and others did not.

The Full Court held that Burley J did not err in deferring the question of costs. His Honour had done so where the question of whether any of the batches which were imported and sold infringed.

In the circumstances, Burley J deferred costs until the quantum aspect of proceedings had been resolved, so this issue could be further explored. The Full Court observed that this was a sensible course. 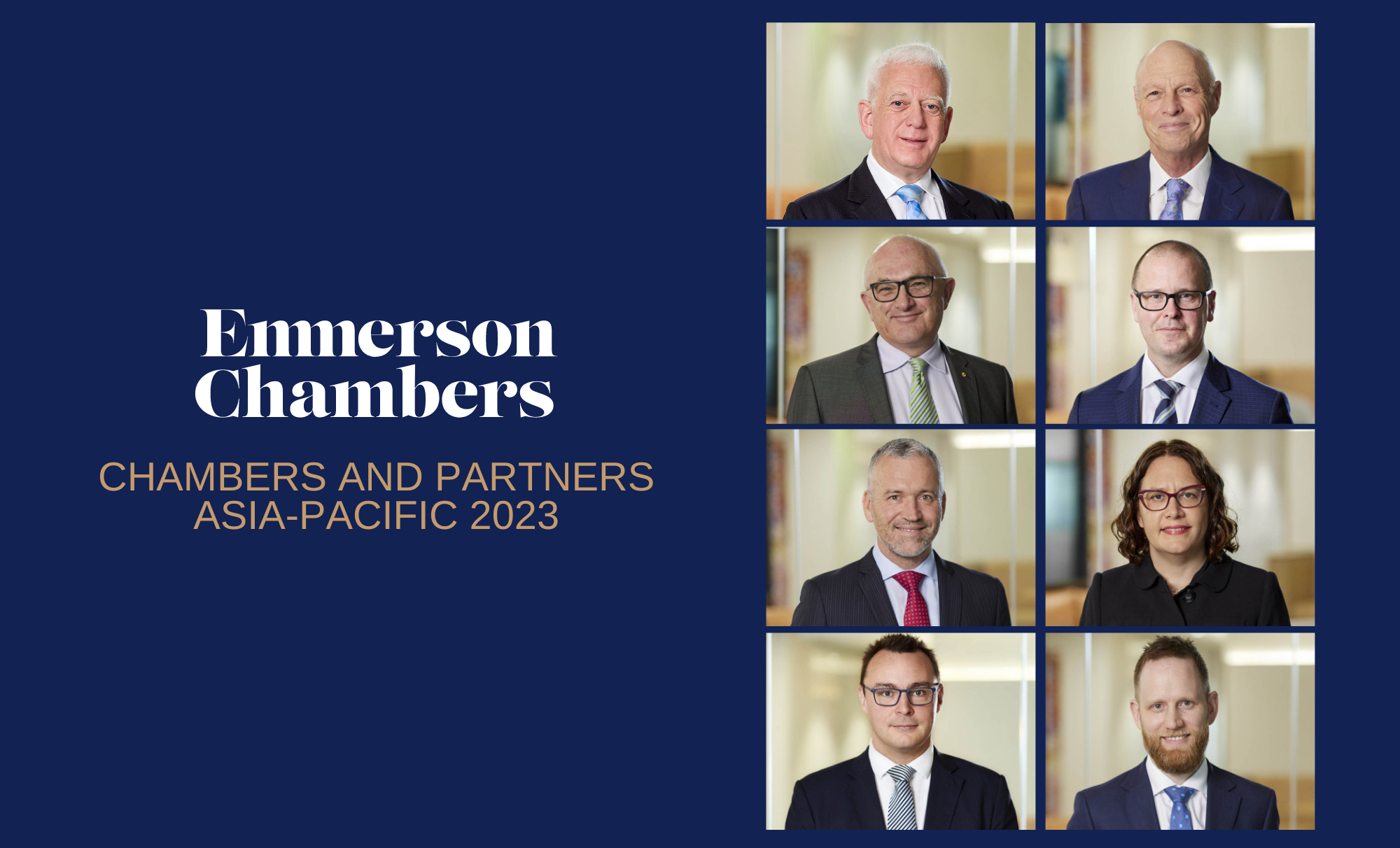 Our barristers recognised in 2023 Chambers and Partners Asia-Pacific rankings!

Emmerson Chambers would like to warmly congratulate our barristers ranked in the Chambers and partners Asia-Pacific Rankings for 2023 for leading Intellectual Property Law Senior Counsel and Junior Counsel at the Australian Bar. 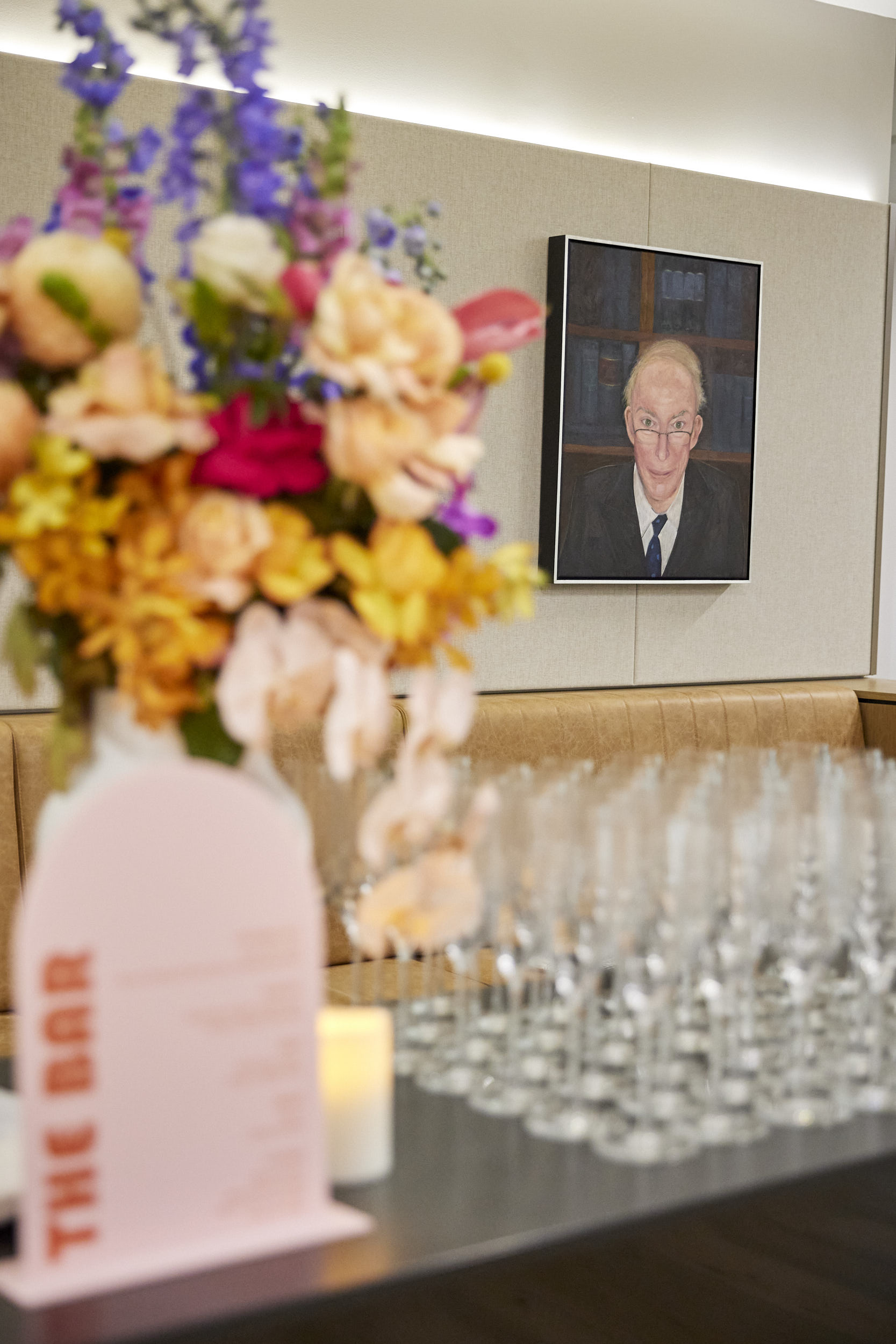 On 4 November 2022, the barristers of Emmerson Chambers were delighted to hold a launch event two years in the making. 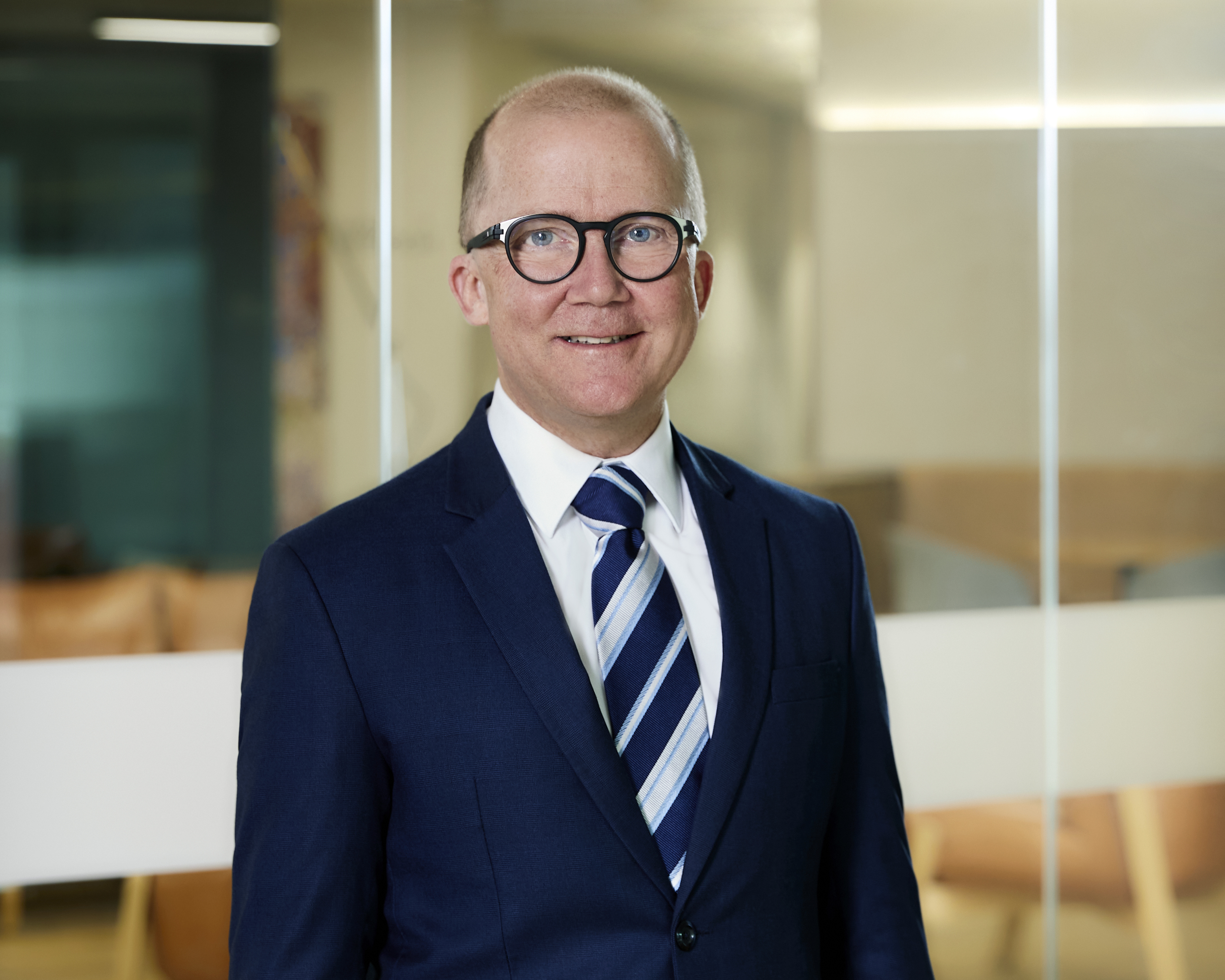 Emmerson Chambers are delighted to announce that Her Excellency the Honourable Dr Jeannette Young AC PSM, Governor of Queensland, has approved the appointment by Letters Patent of Ben Gardiner as King's Counsel.